Following is a short, updated guide on how to set up and run one of the most successful fundraising projects recently devised for baseball and softball teams—The 100-Inning Game.

Because you use the JUGS machine as your "Designated Pitcher," this game takes just ten hours or less to play. Here are the points you need to know:

1. Tell your players they will be playing 100 innings to raise money for your team. Each player must play at least 2-1/2 hours in the game, and each player must get ten sponsors to pledge 10¢ per inning. The team is pledging 10¢ x 100 innings, which is ten dollars.
2. Your opponent for this game can be a cross-town rival, who might also decide to get sponsors, or an alumni team, or even an intra-squad affair—the blue vs. the gold, etc.
3. Write a brief "Dear Neighbor" letter, similar to the one shown at the end of this article.

4. Print up 30 of these "Dear Neighbor" letters for each of your players, which they should distribute to their neighbors and friends. If you have email lists, an email version of the letter should be sent.
5. Print up 100 sponsor sheets, using the form at the end of this article.

6. A day or two after your neighbors have distributed the "Dear Neighbor" letters, each player should visit those homes. When a neighbor agrees to be a sponsor, the neighbor should fill in his or her name and other information on the player's sponsor sheet. Players should not collect any money until you have actually played the 100 innings.
7. Try to find a fast food place to help you, by giving you free "two for one" coupons. For every dollar a sponsor pledges, you then give that sponsor one of the "two for one" coupons. Fast food places are surprisingly receptive to projects like this, so don't be afraid to ask!
8. Make sure you have done the following five things at least two weeks before the game:
a. Reserve a field for a ten hour period, 8 a.m. to 6 p.m.
b. Make sure your JUGS machine is in good running order. Practice setting the dials until you find the straight ball speed that is fast enough to strike out half of your team regularly and use that setting during the 100-Inning Game. (The last thing you want in a 100-Inning Game is a lot of hitting!)
c. Try to get ten volunteer umpires. Two umpires at a time, working for two hours should be enough.
d. Print up seventeen copies of the official 100-Inning Game score sheet.
e. If possible, paint a scoreboard on a 4' x 8' piece of plywood. Here is a sample scoreboard:

A photo of your players behind this scoreboard after the game should be sent to the local press, along with highlights of the game. This is especially important if you have worked out a "coupon deal" with a fast food place. Remember, that place will love the free publicity in the press, and will be more likely to help you out in future years with other 100 inning games.
9. At least a week before the game, make a time schedule of when your players will be playing. It's best to have four lineups, using your JV players too. That way, each lineup plays 2-1/2 hours.
10. Play the game using these rules:
a. Pitchers will feed JUGS, then field their position.
b. Each team should hit for nine outs, clearing the bases after every three outs.
c. Pitchers get to hit. If a batter has two strikes on him, and then hits a foul ball, that batter is out.
d. Set up a protective screen in front of JUGS. Any batted ball that hits the screen is a "do-over."
e. Use leather baseballs. Have at least four dozen available.
f. After the game is over, make certain you tell your players to "collect that cash!" Money not collected by three days after the game is very tough to collect.
g. Write short personal "Thank you" notes to the umpires and to your opposing coach.
h. Write a standard short "Thank you" letter, including some highlights of the game. Have each of your players copy this note on your team's stationery if you have it. A player who found ten sponsors should copy this thank you note ten times. Mail a "Thank you" to every person who sponsored your 100-Inning Game. This is time-consuming, and the postage will cost you money, but it is a real good investment, especially if you intend to play a 100-Inning Game every year.
i. Count your money! If thirty players have found ten "dime sponsors" each, you team will have raised $3,000. (The average amount raised by 93 teams who played 100 inning games in 2003 was $3,744. So, a goal of $3,000 is very realistic.)
j. One last favor—could you send an email to stevec @ jugssports.com telling him and us a little about your successful 100-Inning Game? Include a photo of the team if possible and tell us how much you raised. We may publish your team photo and the results of your fundraiser in a future issue of The JUGS online newsletter.
Thanks, and good luck, coach!
Here is the "Dear Neighbor" letter used by Housatonic Community College for their 100 inning game, which raised $4500
Dear Neighbor:
On Saturday, October 22, the Housatonic Community College Hawks will play the Sacred Heart University Pioneers in the first annual "Great American Baseball Marathon." Our HCC team member is asking you to consider pledging a nickel for each of the 100 innings we will be playing at Pioneer Park on the SHU Campus.

Part of HCC's winning tradition has been the result of ambitious preparation which includes a five week fall program, a rigorous off season conditioning program, and a preseason southern trip.

Because the spring training trip to Florida is entirely financed by the student athletes and coaching staff, several fund raising events are held prior to our March departure.

Our first event of this academic year is the "100 Inning Marathon." Like us, our crosstown friends and rivals, Sacred Heart University, will also utilize the Marathon as a means to finance their spring trip.

Our HCC baseball athletes are seeking your support. Their participation in this eleven hour endurance test will require tremendous effort, but they are conditioned young people eager to meet the challenge.

Baseball and academics are important pursuits for them at this time in their lives. Please consider joining us in this major project. Remember your contribution is fully tax deductible.

What better way to say, "Go get 'em Housy, keep up the good work!" 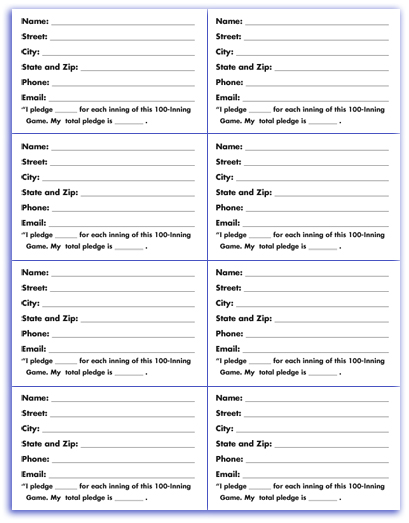 This is a sample to show you how to use this score sheet. The visiting team has just completed its first turn at bat, hitting for three innings.
Notice, when the team scored, an X was placed in one of the "runs" boxes. When an out was made, an X was placed in an "out" box.
Remember to fill in the "runs scored this inning" space, and the "total runs scored" space after three outs are made.
You must make 25 copies of this page to be able to score the entire 100 inning--good luck and have fun!