About Us
The Jugs Story
The first JUGS product, a curveball pitching machine, has developed into the most revolutionary training aid for all phases of the game of baseball. With its ability to accurately throw more than 600 pitches over the plate in one hour, at any speed or spin desired, JUGS is the best training aid for players of all ages.
But JUGS is more than a pitching machine. Fielding practice has been greatly improved by using JUGS to throw grounders, pop-ups, and flies to infielders, outfielders, and even catchers. JUGS is also great for simulating game-like conditions and aiding in pre-season tryouts.
Other JUGS products which have spun off of this original concept are causing just as much excitement in their respective areas. Now, teams in seven other sports are enjoying better practices because of JUGS products. Besides baseball, there are now JUGS machines for softball, football, soccer, field hockey, lacrosse, and even the British Commonwealth’s national sport—cricket! 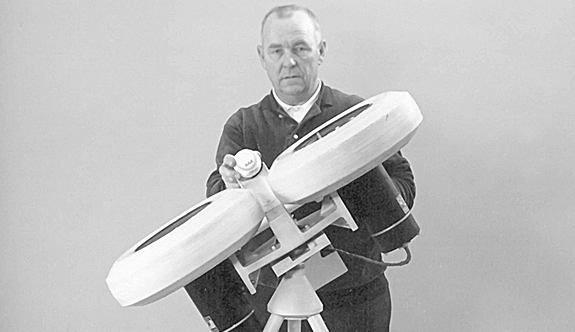 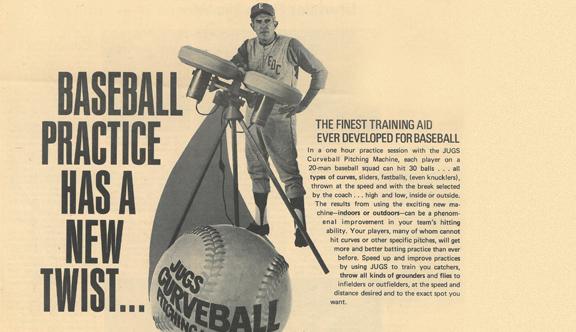 Left: Founder John Paulson with the first JUGS Curveball Pitching Machine in 1971. Right: First JUGS advertisement, “Baseball Practice Has a New Twist” - Appeared in Collegiate Baseball Newsletter, January 7, 1972.
When John Paulson set out to build a baseball pitching machine to help his two sons become better hitters, he didn’t realize the venture would have such a tremendous impact on the great American pastime. But that is exactly what happened. Ninety-four percent of all baseball players entering professional baseball in the last forty-two years have developed their skills with the help of JUGS.In 1970, Paulson began investigating the various pitching machines that were available at the time but found them lacking in many aspects. Most were prone to falling apart under normal use, were too heavy and hard to move, would not throw strikes consistently, and would not throw realistic curves.
As a result, Paulson purchased a patent covering the use of pneumatic tires to throw baseballs and incorporated some ingenious ideas of his own to create a new pitching machine. This machine not only threw all types of pitches—curves, sliders, fastballs, and even sinking split-finger fastballs, at any speed desired—but it was also durable, trouble-free and light enough to be transported in the trunk of a small car. The machine was named the JUGS Curveball Pitching Machine, from the old-time baseball expression “jug-handle curve.” The key to the machine’s instant popularity was its portability, durability, and its ability to accurately throw all types of pitches, especially curveballs.
Rise To Fame
Jugs becomes the cornerstone of practice
In a very short time, almost all college national championship teams and contenders, as well as state high school champions, were using JUGS. Word spread quickly among baseball coaches about how JUGS was helping build championship teams. Articles in trade magazines sang its praises. Sports Illustrated covered the machine on three different occasions and predicted that JUGS would revolutionize baseball.

As so often happens in many industries, the first ones to recognize the value of th enew development - the fist ones to buy JUGS were - the most successful coaches in the country.
The recognition of JUGS reached its zenith when Paulson appeared on the nationally-televised Mike Douglas Show to demonstrate the machine with “Mr. October,” Reggie Jackson.

Today, over 203,000 teams use a JUGS machine at their practices. In fact, the most widely used pitching machines in the world are made by JUGS Sports.
John Paulson did not stop with just one pitching machine idea. Recognizing the need for improved practice and play in youth leagues, Paulson designed the JUGS Jr.™, an inexpensive pitching machine which throws amazingly-accurate straight balls, as well as flies and grounders for fielding practice.
Paulson then began to take a close look at other sports to see how the JUGS concept could help athletes improve in those sports. The creative energy of John Paulson produced remarkable results: a softball machine that throws risers, drops and slowpitch tosses; a football-throwing machine that can toss a perfect spiral over 100 yards; a soccer machine that “hooks” high-arcing corner kicks right into the goal; and new equally impressive JUGS machines for other sports.
JUGS products now available include practice baseballs and softballs, heavy-duty batting cage nets, protective screens, automatic ball feeders, numerous hitting aids and the famous JUGS Radar Guns—the first radar guns designed specifically to measure the speed of baseballs and softballs.
Just as the JUGS baseball and softball pitching machines have helped batters of all ages dramatically improve their hitting skills, the famed JUGS Gun is likewise helping pitchers master their craft. The top scouts of Major League Baseball Teams use The JUGS Gun as their main tool in discovering new pitching prospects. 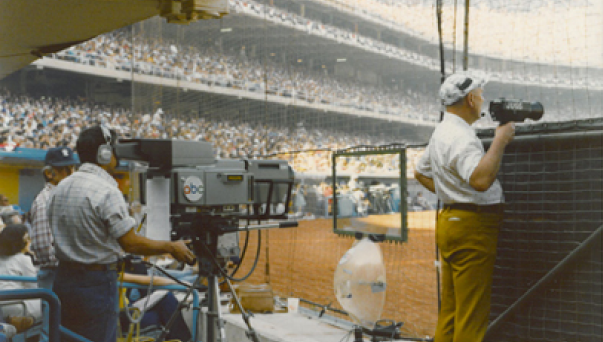 “The Ultimate Pitching Machine” In March of 1984, John Paulson passed away. Right up until the time of his death, he was enthusiastically working on what he termed “the ultimate pitching machine.”

Explanding on the legacy of their father, Mr. Paulson’s sons, John Jr. and Butch continued working on “the ultimate pitching maching” project and produced the redesigned JUGS Curveball Pitching Machine. 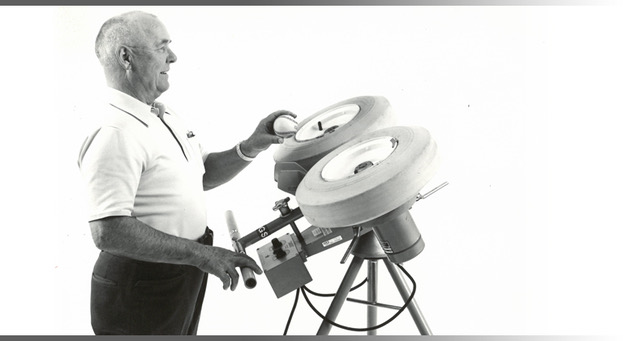 With the advent of the JUGS MVP, ballplayers could now play a fun-filled, action-packed 7 inning game in uner 90 minutes. Today, over 5,600 pitching machine leagues have become a mainstay of youth baseball.
The JUGS INSTANT SCREEN
This amazing screen is the number one selling screen of its kind. Add some additional information that talks about how great this screen is in this space.
Beware of Internet Knockoffs! 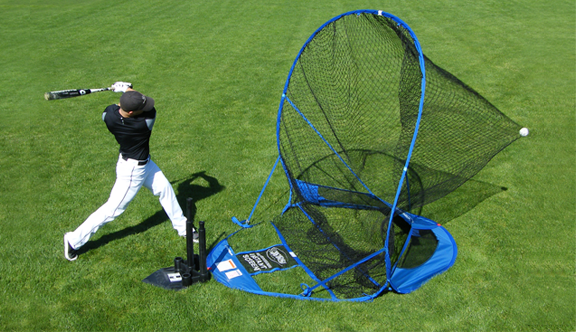 In 1997, the realization that practices were changing and that coaches and teams were more on the go led to the creation of the first folding and portable screen of it's kind—The JUGS Instant Screen®. At a huge 7' x 7' size, the Instant Screen® has become part of practices throughout the world.
In 2003 JUGS introduced the JUGS Lite-Flite® Machine. The Lite-Flite® Machine brings one word to mind—FUN! It weighs just 35 lbs. and can be easily transported from the park to your backyard. It throws Lite-Flite® and poly baseballs and softballs and can be adjusted to throw all types of pitches, including fastballs, curves and sliders.
2007 saw the addition of the JUGS SMALL-BALL® Pitching Machine. What makes the SMALL-BALL® Machine unique is that it throws the JUGS Polyurethane-Foam 5'' SMALL-BALL® up to simulated speeds of 75 mph. It also comes complete with a 25-ball automatic feeder. The JUGS SMALL-BALL® Machine throws fastballs and overhand curves with uncanny accuracy and weighs just 23 lbs. 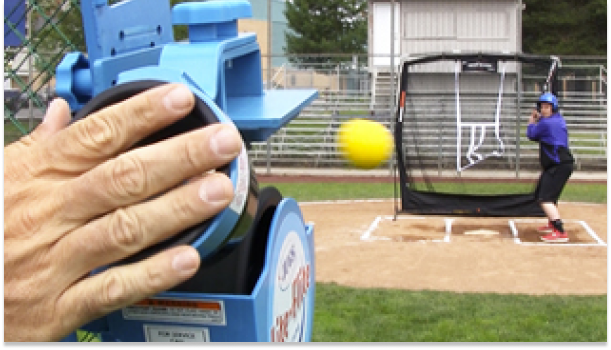 High Fun Factor: In your backyard, on the field, or in the gym - if your players love to hit, the JUGS Lite-Flite Machine is perfect for you. No matter if you want slow tosses or challenging breaking pitches, this machine delivers lots of strikes and lots of fun!

Focus Small, Hit Big! The touchest thing to do in sports is hit a round ball with a round bat. Now try it with a bat and ball half the size.

Practicing small with the JUGS Small-Ball Pitching Machine will force hitters to focus during practice, which translates to more confidence and success when the real games start. 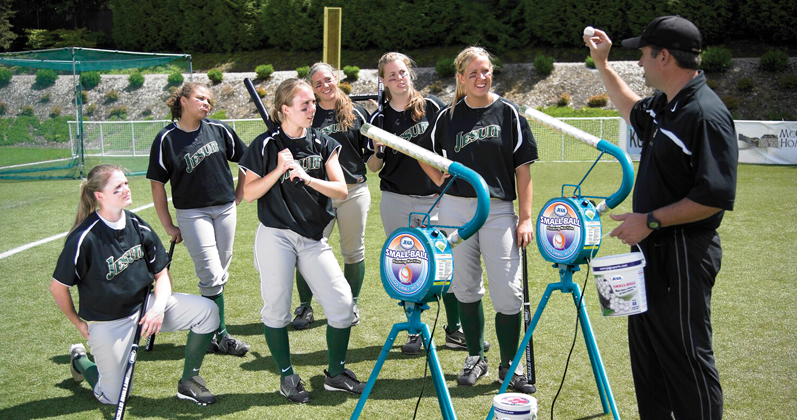 Throughout the research and development of every JUGS product, John Paulson’s methodology has remained a constant: observe how athletes practice their respective sports, then develop machinery and practice equipment that will help those athletes reach their highest possible level.
In 2016, JUGS Sports took the next step in machine technology by developing a pitching machine that could go from fastballs to changeups at a touch of a button. Imagine setting up for a 70-mph fastball and getting a 55-mph changeup instead. The amazing thing is as a hitter you won’t see or hear the machine change speeds. This is as close as a pitching machine can get to a live pitcher. JUGS Sports is confident that this new changeup concept will revolutionize how teams take batting practice. Cutting edge ideas like this is one of the many reasons JUGS Sports has remained the #1-selling pitching machine company in the world for over 47 years.
The Paulson brothers have carried on this tradition at JUGS Sports. Because of this, you can be sure that all JUGS products will continue to lead the way to more innovative practices and an overall improvement of every sport that uses them.
For 2017, JUGS Sports has introduced the most advanced two wheel pitching machine ever produced, the JUGS BP®2. It replaces the legendary JUGS Curveball Pitching Machine after 4 decades of exemplary work
The BP®2 Baseball Pitching Machine
This machine comes standard with Pinpoint Micro-Adjustment: the most advanced and easy to use pitch targeting system ever developed for 1-wheel, 2-wheel, or 3-wheel pitching machines (patent pending). Locate pitches instantly - right to left, up or down with a quick turn of your wrist.

The BP®2 Takes the Guesswork Out
The BPTM2 also comes with Digital Speed Adjustment (20-90 mph range), Select-A-PitchTM Dial-Changing pitches is as easy as turning a knob, a realistic 64” delivery height and with 6 Pre-set Pitch Positions.

JUGS JUST CHANGED HOW YOU PRACTICE
With hand-held Remote Control, switch between fastballs and changeups at the touch of a button. Remote Control can be used at the machine, behind the hitter, or even in the dugout. 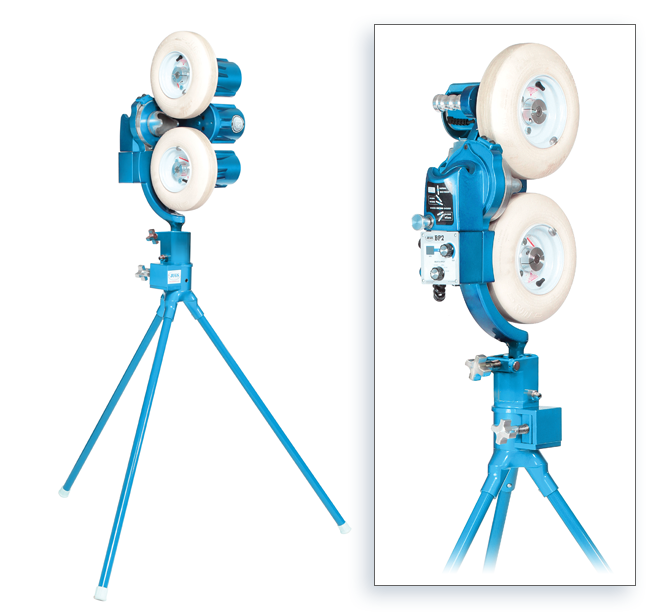 A PARTNERSHIP DECADES IN THE MAKING 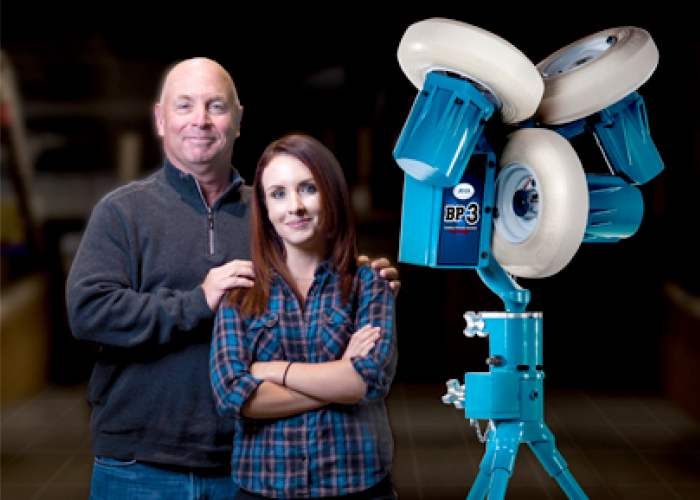 Butch and Elise Paulson
Son and Grand-Daughter to founder John Paulson
For 2018, JUGS Sports has introduced the most advanced three wheel pitching machine ever produced, the JUGS BP3. It is the culmination of 3 years of research and hard work. In the video below, Butch Paulson, President of JUGS Sports, explains why he is so proud of this new machine.